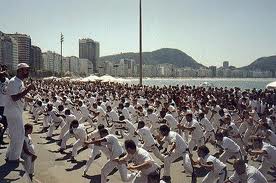 ABADÁ-Capoeira Bronx (ACBX) works to preserve, share and expand the art of capoeira within diverse communities and families. ACBX uses the practice of Capoeira as a medium to develop youth, build community and inspire people to reach their maximum potential.

ACBX creates multifaceted Capoeira Arts programs that explore the many disciplines the art encompasses from which students can benefit from physically, emotionally and spiritually.
Our programs cater to all ages and operate on-site, at our full time Capoeira Cultural Arts Center in the Bronx and off-site, largely throughout NYC schools.

While the work of ACBX has existed since 2010, the organization received 501(c)(3) status in 2017 when it opened its full time Capoeira Arts Center – the first and only of its kind – in the Bronx.
Our programs creatively motivate communities to be physically active through the scope of Capoeira and related cultural arts.

ACBX shares name and philosophy with the international ABADÁ-Capoeira association, established in Rio de Janeiro in 1988 by President & Founder Mestre Camisa.  ABADÁ-Capoeira is one of the strongest promoters of Brazilian culture and social change in and outside of Brazil, developing capoeira programs in academic settings, organizing international events, seminars, lectures and social projects throughout the world.  Currently ABADÁ-Capoeira has representation in 60 countries, with more than 70,000 members worldwide.  ACBX is an extension of the work ABADÁ-Capoeira imparts worldwide.

ABADÁ-Capoeira incorporates a multilevel philosophy which includes the relentless pursuit of the technical mastery of capoeira, on both student and teaching levels; the use of the art as a valuable academic tool, as well as an artistic and cultural resource; and the transformation of its students into teachers who will preserve the value systems of our capoeira ancestors, their cultures and life experiences.
ABADÁ-Capoeira seeks to promote cultural and human values based on respect, socialization and freedom. It hopes to accomplish these goals by spreading the art of Capoeira in and through universities, schools, clubs, associations and diverse communities. It also hopes to emphasize the lessons inherent in its Brazilian cultural and historic roots, and by doing so, promoting social integration between people of different backgrounds and classes, while keeping sight of its social goals.  ABADÁ-Capoeira also seeks to instill good character, dignity and strong personal values in its students.

We at ABADÁ-Capoeira understand that Capoeira is, and always was, both an ancestral and future-oriented art form. It is the living expression and embodiment of a people that fights for liberty. In this light, we believe it should be practiced with reverence, and it deserves from our part the same respect and attention it was given by its originators. We also realize that Capoeira must not cease to evolve. While preserving the values involved, our work points toward the future, embracing changes and advancements, seeking to give Capoeira the space and freedom it demands for it to develop to its full potential. The art of Capoeira, like the chameleon, seeks change as a way to preserve its own essence.

The main focus of the ABADÁ-Capoeira philosophy is to be found in both Mestre Bimba’s Capoeira Regional style and the lessons of Capoeira Angola. It is at this junction where the evolution of Capoeira lies, and where its future is discovered hidden in its past.
ABADÁ-Capoeira prides itself on the originality and constant refinement of its style of Capoeira, renown for efficiency, athletics, and cultural and historical relevance. The original style of ABADÁ-Capoeira seeks to incorporate both Capoeira Regional and Capoeira Angola, and embraces the modernizing innovations of the legendary Mestre Bimba without losing sight of the history and philosophy of the ancient art.
ABADÁ-Capoeira’s teaching methodology is both challenging and supportive, rooted in the belief that encouragement and positive role-modeling enable Capoeira to enrich the lives of all students, regardless of level or background. ABADÁ-Capoeira provides all students with leadership skills and tools to develop into competent professionals.