Developed in the 1500’s by enslaved Africans in Brazil, Capoeira is a unique art form that blends self-defense techniques, acrobatics, dance-like movements and music into a martial art form.

The capoeira game is played in a circle called a roda, where two capoeiristas engage in a spontaneous conversation of movements, corporal expression, and self-defense techniques (kicks, dodges, take-downs, etc) accompanied by graceful acrobatics and music.  The capoeiristas emphasize on control of their movements, quick strategy and reaction to smoothly trick each other and conquer one another’s space.

Those who form the roda clap, sing and play hand-made percussive instruments such as the berimbau, the atabaque (drum), the pandeiro (tambourine), and the agogô (cowbells). Music is essential in capoeira.  The rhythm played by the berimbau determines the type of game that takes place.  The rhythm also sets the pace of the game, movements and characteristics of a given game.

Songs are sung in a call and response format or in the form of narratives. Typically songs can tell stories about capoeira figures, anecdotes, tales, life deceptions or victories, humor, etc.  Often the capoeira singer uses songs to comment on the game being played at the moment, thus making the capoeira roda as spontaneous as it can be. 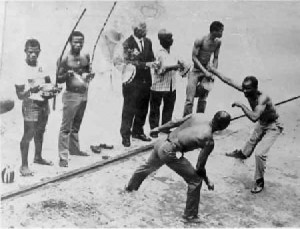 Masking capoeira as a dance, enslaved Africans were able to practice capoeira and hide its potential as a weapon to fight for their freedom. They practiced capoeira in the plantations and eventually used its fighting techniques to revolt against slave masters.  During these
revolts, many slaves escaped to form runaway-slaves’ communities called Quilombos, where capoeira continued to be practiced and flourished.  Capoeira served not only as a means of survival but also as a form of self-expression that would bring people together and help maintain customs they had been forcefully stripped of. 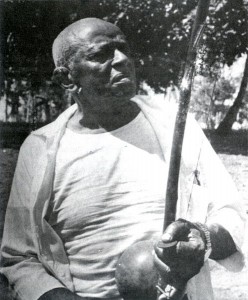 After the abolition of slavery in 1888, two years later the practice of capoeira was prohibited and a capoeirista became synonymous with a vagabond and an outlaw. Anyone caught practicing capoeira, would be arrested and severely punished by the police. However, secret encounters allowed for capoeira to be preserved.  After much perseverance from capoeiristas the ban on capoeira was lifted. In 1932 legendary Mestre Bimba, creator of the capoeira style known as Regional, opened the Centro de Cultura Física Regional -the first legal capoeira school in Bahia.

Mestre Bimba and his students vigorously trained and performed around the country in order demonstrate capoeira’s efficiency as a martial art and to bring the masses closer to the art.

In his life-long effort to eradicate the negative connotation of capoeira, Mestre Bimba’s students had to comply with many rules in order to be allowed to train at his academy, which included show proof of grade proficiency from school, demonstrate good conduct on the street, etc. Among Mestre Bimba’s students were Grão Mestre Camisa Roxa and his younger brother Mestre Camisa – President and Founder of ABADÁ-Capoeira.  Following his footsteps, Mestre Camisa would go on to perfect and create new capoeira techniques, becoming a pioneer in contemporary capoeira.

Introduced in the US in the 1970’s, capoeira continues to expand throughout the world, becoming one of the country’s top exports.  It is the most practiced sport in Brazil, second only to soccer, and in 2009 it was classified as a national cultural patrimony by the UNESCO.   Today, people around the world reap the benefits this multifaceted art can offer, which has transcendent frontiers to be practiced by individuals of all walks of life.

The Batizado is the most anticipated event in the life of a capoeirista.

It is an event customary to the practice of capoeira where new students are officially welcomed into the capoeira community, some may receive their nicknames the day of the event, and continuing students are moved up in rank.  Students receive ranks based on their level of progress and dedication they have demonstrated during the year to the art of capoeira.  The event is a time to celebrate the achievements of students, the support from friends and families and enjoy a cultural extravaganza as guests artists from Brazil put on a high-energy, gravity-defying show.

Special guests artists and Mestres are invited to the event who not only are a delight to watch play capoeira games but also serve as inspiration for the young students to excel in the art and continue their paths as capoeiristas.
Prior to the batizado, usually a series of workshops are held with the special guest of the event.  This time serves as a great cultural exchange as students from the larger NY and USA capoeira community take part in these workshops.